“Giant Serpent” bites the way of life and people: Dawei Road Link and the change of the affected community

“Dawei Road Link” is one of the many sub-projects of Dawei Special Economic Zone (Dawei SEZ) which would open up Southeast Asia for foreign investment and industrial development at a scale never has been done before in the region. The aim is to attract foreign investors from outside the region to invest in projects and activities related to logistics, services, and human resources development as should be demanded by the deep seaport and related activities. Dawei SEZ is planned to connect the most western parts of the Mekong region to the most eastern parts in southern Vietnam around the Mekong river delta and its proximity. International Financial Institutions such as World Bank and Asian Development Bank have called Dawei SEZ “the southern economic corridor” of the Mekong region.

The purpose is to shorten distances for logistics of goods and services from Andaman coast, particularly from Dawei township in Myanmar, to the South China Sea while bypassing the Strait of Malacca hence cut down the need for transit via Singapore port. It is estimated that, if completed, the new route will allow goods from Andaman to reach Laem Chabang port in Thailand within less than 8 hours.

The total length of Dawei Road Link is 138 kilometers. Starting from k.m. 18+500 from the Dawei SEZ main project, it will cut through many rivers, mountains, wildlife habitats, and communities of ethnic minorities, and head toward the Thai-Myanmar border at Ban Phu Nam Ron in Kanchanaburi Province at k.m. 156+500 from the Dawei SEZ. The Road Link will be significant to Thailand’s economic expansion since it is designed to connect with the Thai Highway between Ban Kao — Kanchanaburi Province, Highway81 between Kanchanaburi Province — Bang Yai in Nonthaburi Province, and ultimately connect with Map Ta Phut Industrial Estate and Laem Cha Bang Deep Sea Port in Thailand’s Eastern Seaboard. Connecting with the Thai highways was part of the original objectives of the Dawei Road Link project which were later extended to connect with other highways in the Mekong region to create a single ASEAN Highway Network.

Regarding the history of the project and recent progress, Italian-Thai Development Plc. (ITD) received concession from the Myanmar government to develop Dawei deep seaport and the overall Dawei SEZ project in 2010; subsequently, construction of Dawei Road Link began in 2011. Back then it was known as the “4-lane Road Link in Dawei project” and the original plan was even to expand it into an 8-lane road to cater to all types of big vehicles and facilitate motor transports so that goods and services can reach destinations quickly. The 8-lane road would also incorporate rails, natural gas pipelines, electricity grids, and high voltage pylons.

However, nowadays the Road Link project has been officially downsized to 2-lane and being recognized as the 2-Lane Road Link in Dawei project. This is due to the fact that after almost a decade, it is still gravel/dirt-road with virtually no progress. On the other hand, the overall Dawei SEZ project has been facing problems and several consequential halts which also resulted in halts of its related projects like the Road Link. Some of those many problems include delay and incompetency of the project developer to secure adequate fundings and investors — as a result, Max Myanmar, the main investor from Myanmar side, had pulled out of the project. Implementation of the project has been tainted with violation of human rights and community rights; hence affected communities have been voicing their discontents in various forms. Moreover, the fact that the main infrastructures for Dawei SEZ such as deep seaport, reservoirs, and roads remain unfinished has diminished investors’ confidence in the projects. Last but not least, political instability in both Thailand and Myanmar during the past decade is another major setback for the delayed-progress hence down-scaling of the Road Link project into its current 2-lane form. Development of the 2-lane Dawei Road Link is supported by a THB 4,500 million (approx. USD 128 million) soft-loan offered by the Thai government via Neighbouring Countries Economic Development Cooperation Agency or NEDA which had offered the loan to Myanmar since 2015.

Previously, construction of the Road Link under ITD has left impacts on natural resources e.g. water sources, forest, and land which are commonly managed and used by local communities—mostly of Karen ethnics who are the majority of communities living in areas where the road is cutting through. In this regard, more than 80% of the Road Link project area belongs to Karen communities which are influenced by political organizations like the KNU (Karen National Union).

Throughout project implementation, the road has encroached vast areas of farmlands belong to Karen communities who live near the forest. The fruits orchards, betel nut orchards, cashew nut orchards, and rubber gardens which are their main sources of income were raided and swept away. The main river and its tributaries which are the communities’ water sources have also been severely affected. Construction of the road left a lot of sediment and soil in the waterways, leaving the water very muddy and blocking waterways. This consequently isolates and damages sub-ecosystems of the river. Their water sources are dirtied and became uninhabitable for fish which is the main source of protein for the villagers in the area. Affected communities have been deprived of access to clean water and food resources in nature where they can forage using traditional knowledge.

A villager once insinuated this Dawei Road Link to a Giant Serpent. The Giant Serpent has gulped their land, orchards of betel nuts, cashews, rubber, vegetables, and fruits orchards as its nourishment. And as much as it eats, its size grows and its poisons spewed onto the villagers’ land and water resources; so much that the problems cannot be fixed in the short term.

Despite the recent long halt, impacts of the Dawei Road Link have prolonged to this day. Nonetheless, in 2019, NEDA has recently tried to push forward the project. From the initial plan developed and partially implemented by ITD, NEDA had commissioned another consultant company to explore and design new detail of the Road Link. The study is expected to finish in September 2019 and implementation of the project is expected to resume in 2020.

While to project continues, affected villagers do not know much about the progress. In fact, they were not informed about it at all. Villagers have been left in the dark as to how the project has progressed nor how it will continue; they are also left with uncertainties as to how they may benefit from it. The Road Link had already destroyed their natural resources, and now they are being disrespected through ignorance. Recurring impacts on the environment and land had not been addressed. Additionally, many, possibly more than half, of the affected villagers have not received compensation; And even if some did, it had not been fair. Compensations did not include recurring impacts from project implementation and their losses in livelihood and quality of life. Local communities bear the many costs which are hidden or blatantly ignored from Environmental Impact Assessment study of the project — increasing costs of food, fish, water, and transportation to access clean water and nature which could provide them with food resources. These are the increased costs of living they have to pay after the Giant Serpent arrived in their land.

The project will resume despite uncertainty and lack of earnestness from Thai nor Myanmar governments nor the project developer to address and recover the already damaged natural resources.

Future of the villagers is still at risk when the Giant Serpent is constantly spewing its poisons. The Giant Serpent is being fed by THB 4,500 million from the Thai government with no concrete detail of how this loan may address impacts already occurred and will occur in the future.

This photo essay tells stories about the Dawei Road Link project, environmental impacts, and changes in livelihood which follow the construction of the road. The Road Link connecting Tiki village, a village on Myanmar border next to Ban Phu Nam Ron on the Thai side, to Dawei SEZ, (Photo was taken on 26 April 2019) 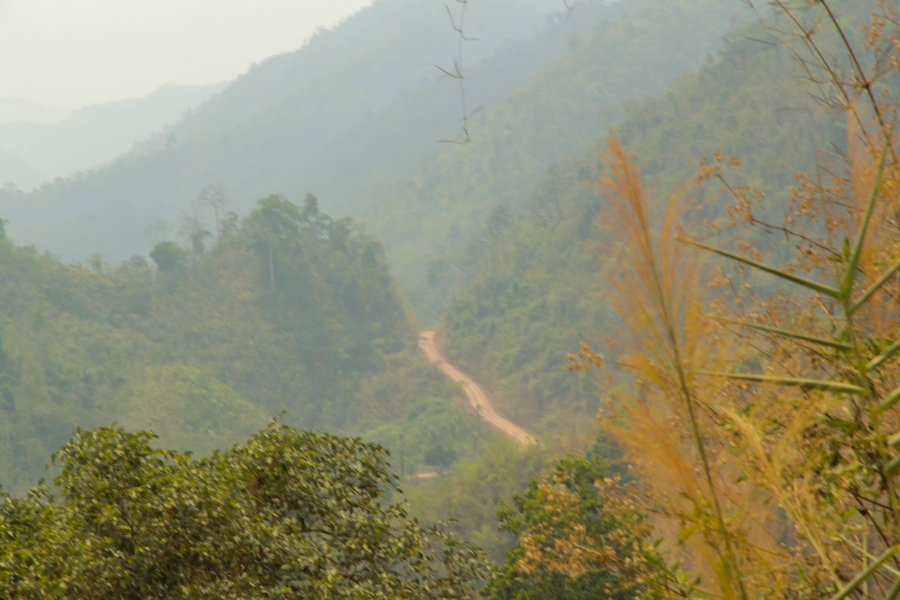 The “Elephant Cry Hill” is the highest point on the Road Link project, (Photo was taken on 26 April 2019) 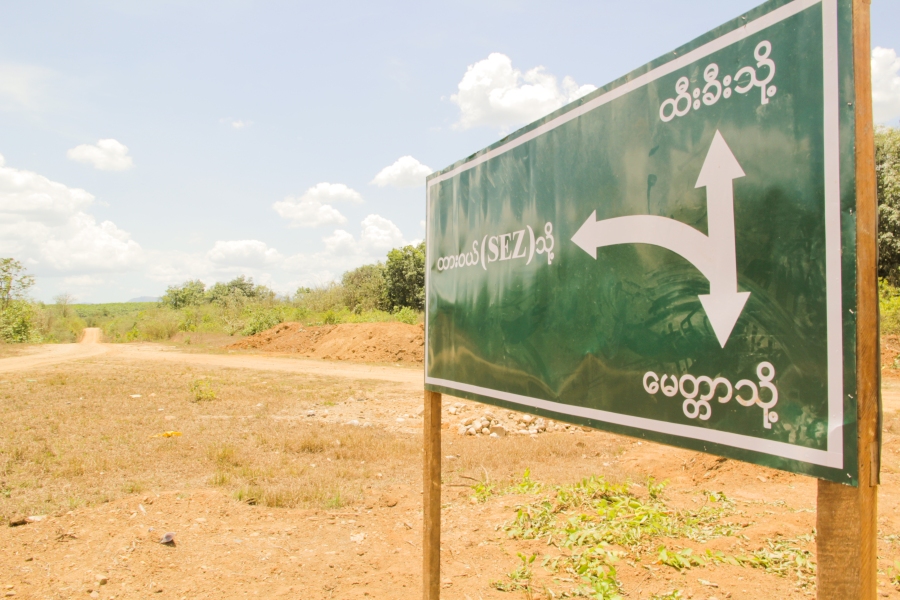 A road sign indicating the way to Dawei SEZ — located at a junction between Myitta village (south), Thai-Myanmar border (north), and Dawei SEZ (west), (Photo was taken on 4 May 2019) 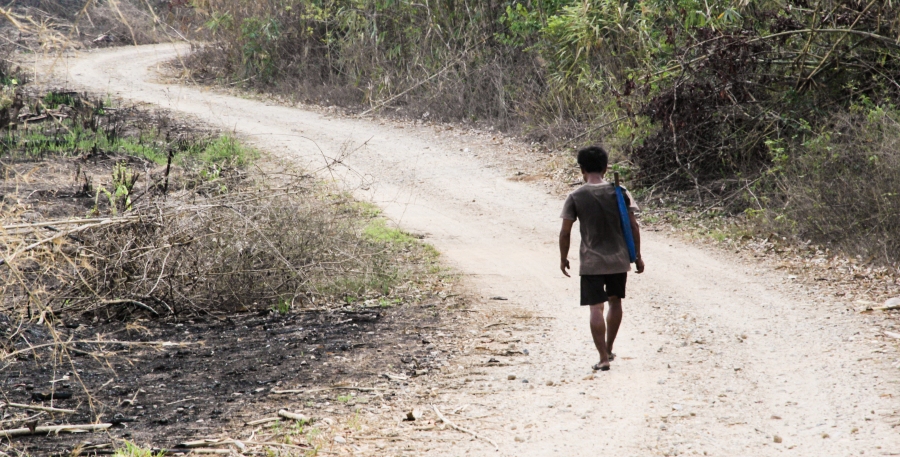 The road is cutting through communities’ cultivation land, fruits and betel nuts orchards, and rotational farmland of many Karen communities. This group of villages is known to the locals as “Kamoethwey area”, (Photo was taken on 27 April 2019) This small hill is in Ka Lit Gyi village, one of the villages in Kamoethwey area. Villagers say under this hill, there is a chedi called “Koh Blor” dated back over 400 years. The chedi was almost destroyed by road construction. Fortunately, the villagers were able to stop the destruction, (Photo was taken on 6 May 2019) 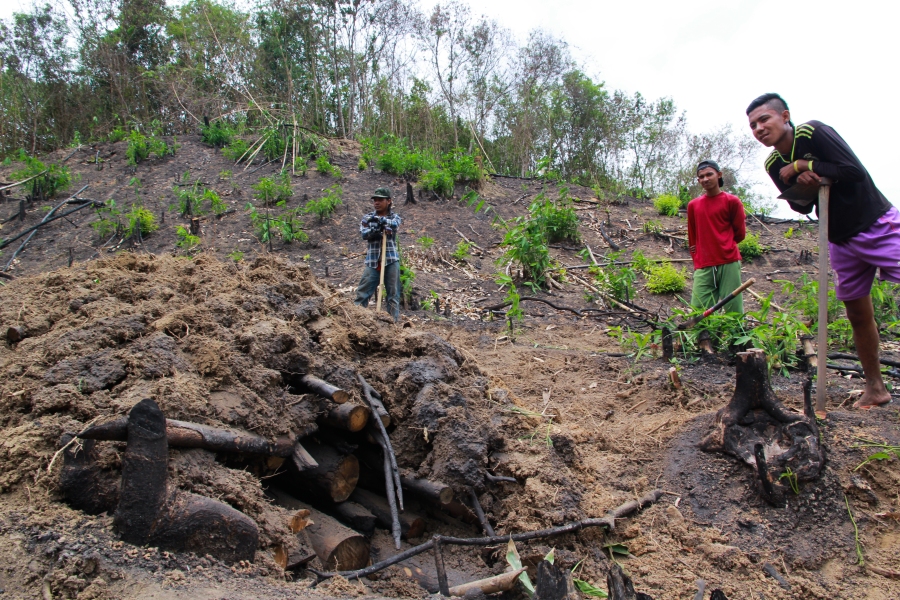 Villagers were burning woods from their farmland to make charcoals and sell them as a source of income for the family. this is part of the process to prepare the soil for traditional rotational farming practice, (Photo was taken on 6 May 2019) 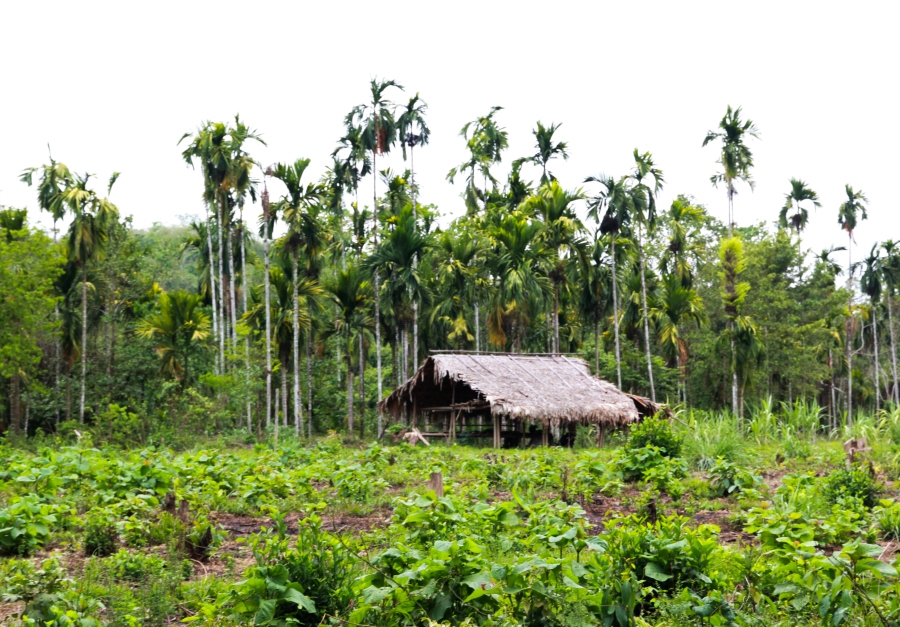 Houses of Karen people usually situated among betel nuts orchards and their own vegetable gardens. Additionally, they usually keep animals around the houses for household consumption, (Photo was taken on 6 May 2019) 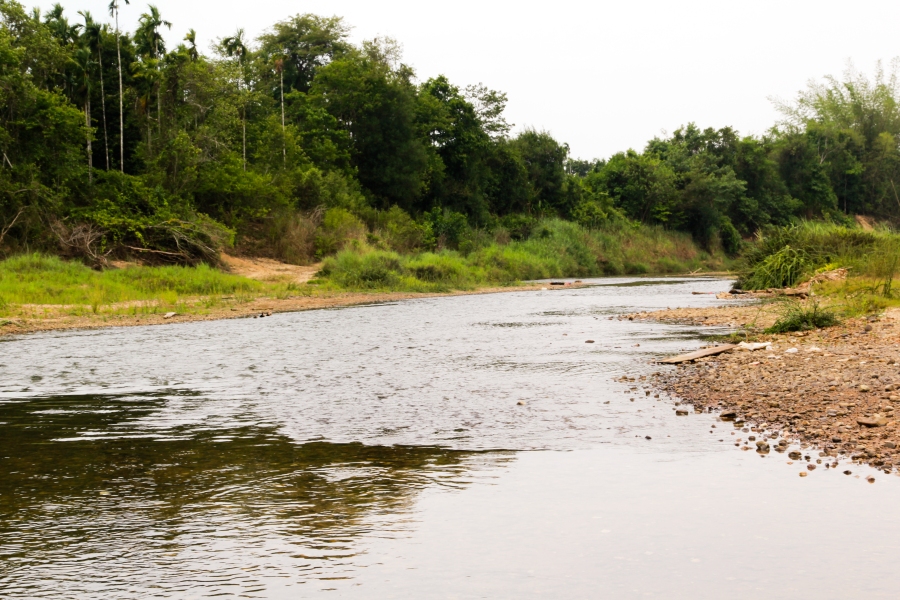 “Kamoethwey River” is a significant river considered the main bloodline of Karen people in Kamoethwey area, (Photo was taken on 6 May 2019) 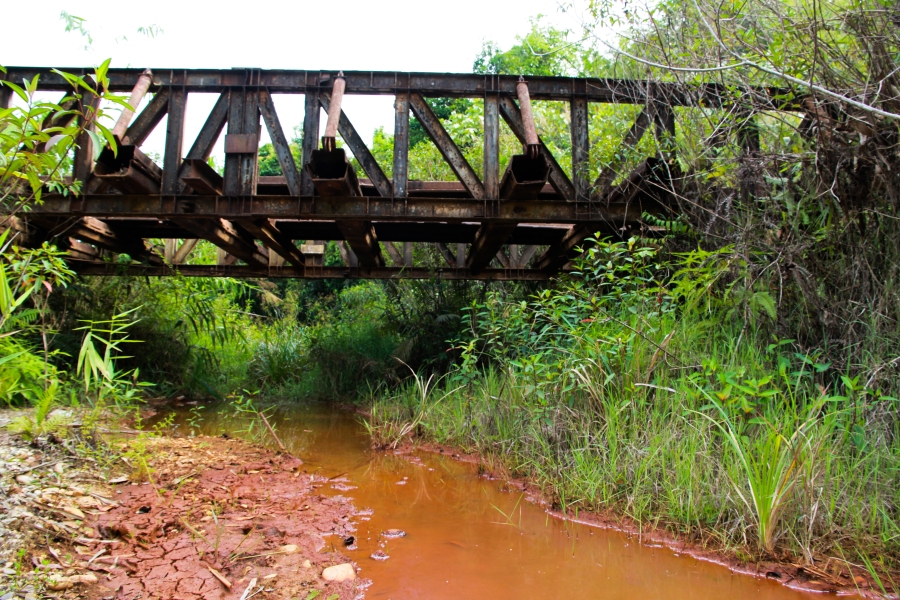 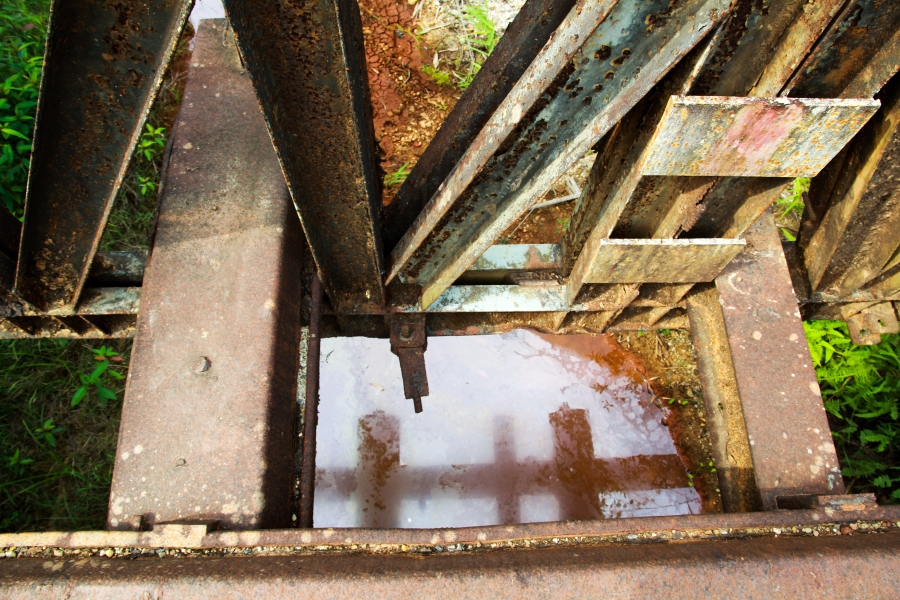 This small creek is a tributary of Kamoethwey river. It was polluted by the construction of the road and associated bridge. Consequently, now the water is not drinkable and small fish can no longer live in the creek, (Photo was taken on 6 May 2019) 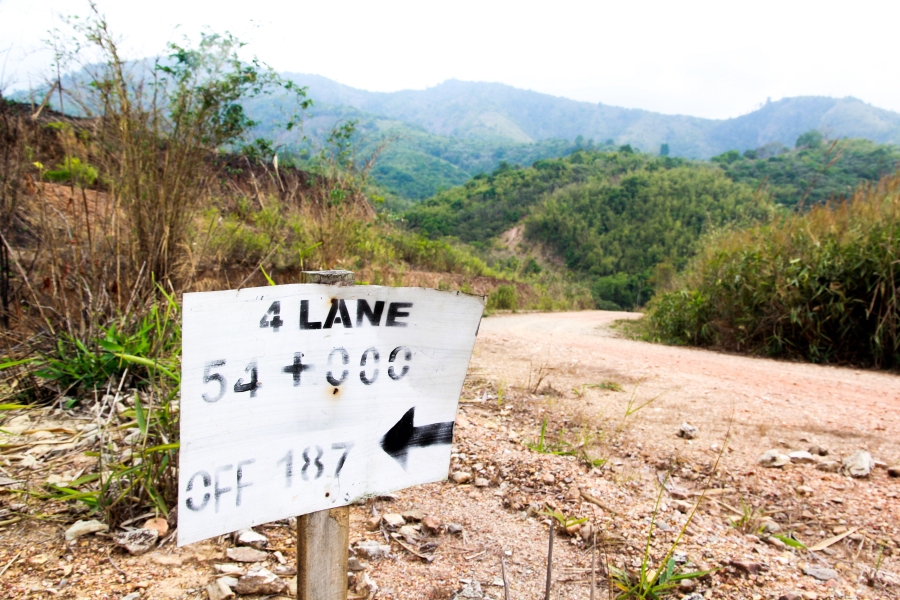 This sign indicates that this location is 54 kilometers from Dawei SEZ. In the future, this road could be developed into a 4-lane road, (Photo was taken on 6 May 2019) 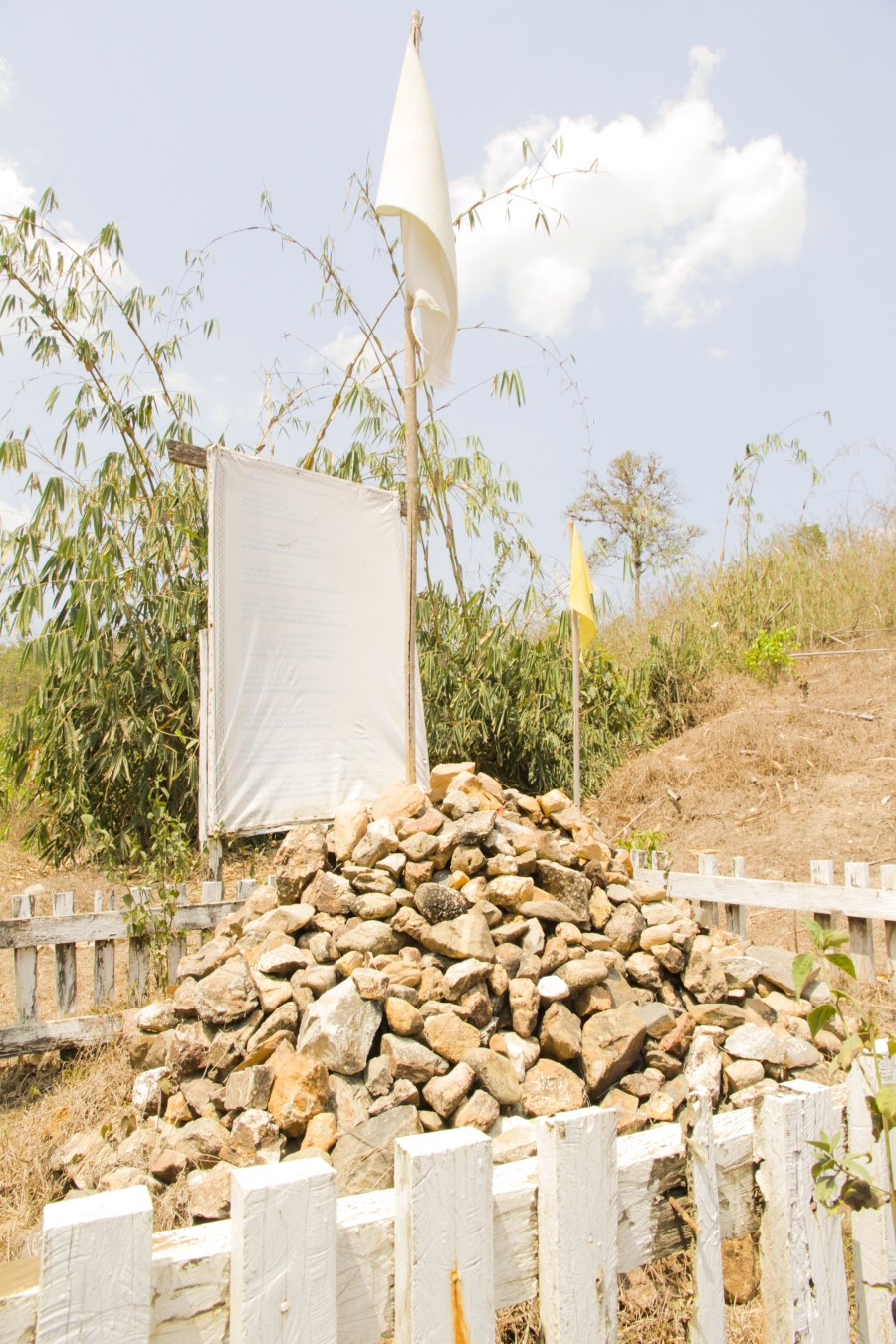 This pile of rocks is located at the junction which is an entrance to Thabyu Chaung and Pyin Thar Taw villages. The Road Link is cutting through this location which is near KM.54 (from Dawei SEZ), (Photo was taken on 27 May 2019) 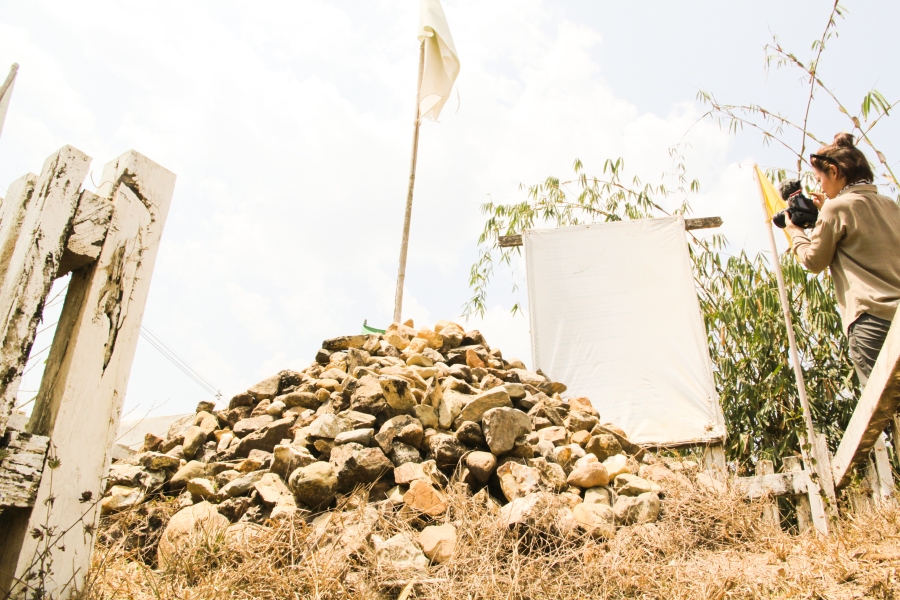 The rock pile is actually a symbolic representation of people’s struggle against the Road Link project. Once villagers organized a road-block here to demonstrate against unfair practices of the company who, while implementing the project, had destroyed their farms and orchards and encroached their land without prior warning hence destroying the communities’ environment. Apart from the rock pile, there is a flag sign written: “We don’t want a 2nd Map Ta Phut”, (Photo was taken on 27 May 2019) 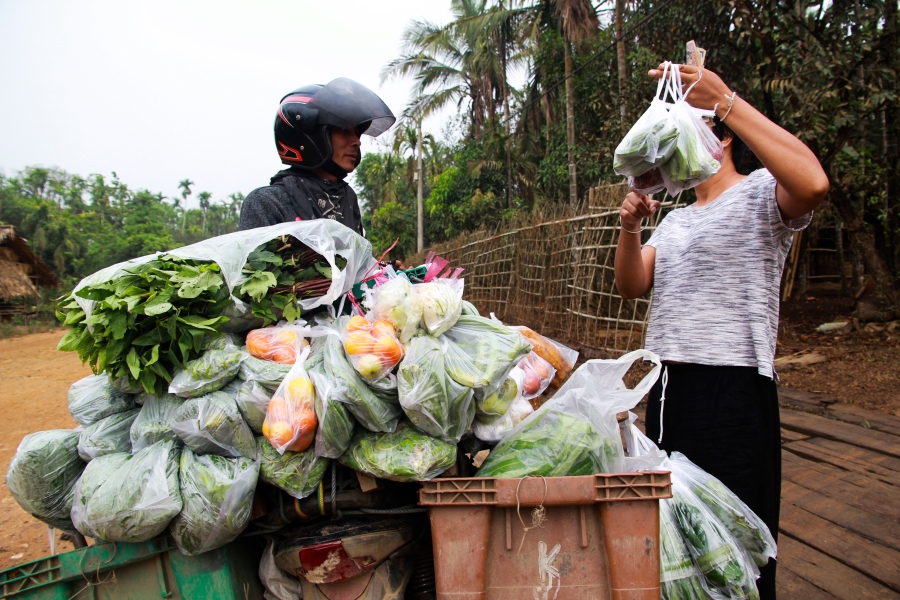 “Market Truck” or vehicles bringing food from outside to sell in the villages has become a necessity for many villages where their livelihoods were destroyed due to the construction of the road which has destroyed their natural resources, water sources, and farmland, (Photo was taken on 13 May 2019) 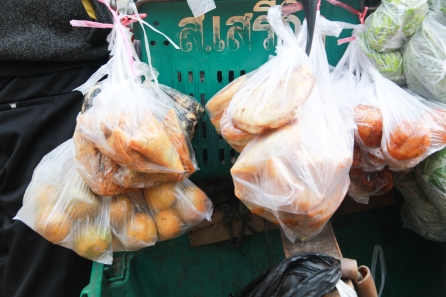 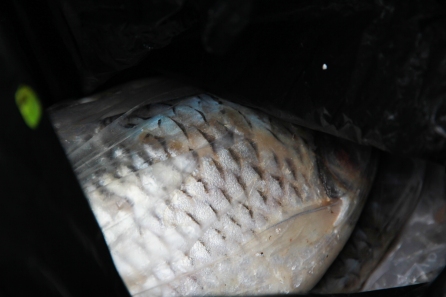 Vegetables, fruits, snacks, and even fish from other rivers outside are sold to communities in Kamoethway area, (Photo was taken on 13 May 2019)

View all posts by themekongbutterfly