It has been over a month that Chatuchak Weekend Market; JJ Plaza and other shopping malls as well as activities which may result in large gatherings of people were closed and postponed after the announcement of the first Thailand semi-lockdown in Bangkok since 22 March 2020. Together with the Cabinet’s promulgation of the Emergency Decree on Public Administration in Emergency Situations temporarily paralyzing various economic activities, although shops and restaurants in many places are still open as usual but the overall atmosphere is rather quiet.

As soon as the said measure came into effect, labors and daily employees were immediately in a temporary unemployed status. Myanmar labors, especially Tavoyans who mostly work in trade and service sectors in the shopping malls; Chatuchak Weekend Market and nearby areas, were more obviously affected.

As evaluated by International Organization for Migration (IOM), the COVID-19 crisis made approximately 150,000-200,000 migrant workers from Cambodia; Laos; Myanmar and Vietnam immediately jobless. Tavoyan workers also seem to be included in this condition.

The semi-lockdown measure was launched in order to prevent people’s gathering and to cease the spread of novel coronavirus (COVID-19) which severely strikes and affects people worldwide. Such measure seems to primarily focus on public healthcare according to a slogan “Health before freedom”, the health of an economy and people’s well-being are then given second priority. Although there are measures to remedy the labors affected by travel restrictions and prohibition of some economic activities that ‘work from home’ cannot be applied, but the remedial measure will mostly benefit formal labors and some types of self-employed workers defined by “No One Left Behind” program. The said program helps those who are not in the social security system (which is neither inclusive nor universal and seems to leave many groups behind), but excludes the informal migrant workers who are unable to enroll in the Social Security Fund. All aid measures are still mainly focused on looking after Thai labors which is not wrong, the government however should not neglect the migrant workers who are the major factors driving country’s economy in different sectors and should be treated equally as Thai workers.

Although the semi-lockdown measure seems to have relatively good results in reducing the spread of COVID-19 as seen in the sharply dropped figures of infected people (even though the government did not conduct the tests at full capacity like many other countries), it has a clear opposite effect on the economy. According to several news reports, the number of people committing suicide due to the semi-lockdown measure as well as the closure of some economic activities preventing the spread of the virus is as high as COVID-19 death rate. When comparing these 2 figures, the decreased infection rate may not reflect the success of the government solutions.

“There was no government staff came in the community checking people’s temperature or getting them tested for COVID-19, they only came once to spray an antiseptic”, said Pip, a Tavoyan man, about the government measures to combat COVID-19 in Wat Pai Tan community where he and most of his Tavoyan friends live.

Pip or Min Latt in Myanmar language, a 34 year-old Tavoyan man working in a restaurant located in Kaset-Nawamin area, has gone through the ups and downs in neighboring country for over 17 years, he is then able to communicate fluently in all the skills of Thai language.

Pip told us that he is working as usual since the restaurant is still open, yet its income declines considerably. The monthly rental is very high, the employer therefore needs to reduce his salary from 15,000 to 3,000 baht in order to cut costs and maintain the business.

“I am still lucky that my girlfriend can normally earn a living, so we can help each other”. Pip himself has just started his new job and has not yet enrolled in the social security system as he has to wait for his employer to manage and approve.

Thailand’s migrant workers system is actually quite good because if he/she has enrolled in the social security system, he/she will be compensated when unemployed and the Department of Employment will assist in finding a new job. It is however not what happen in practice.

There are so many migrant workers who are not in the social security system owing to several problems. One of the most important factors is that the employers do not want to pay a 5 percent contribution which increases their operating costs and responsibility.

“I think I would have to go back to work at Or Tor Kor market next month because the restaurant where I am working seems to halt due to not being able to bear high impacts and costs”, said the middle-aged Tavoyan man.

A house number 105 in Wat Pai Tan community surrounded by crowded tenement buildings and wooden houses was transformed into a distribution center for donations of survival bags; rice; dried foods; alcohol gel; other necessary things for a family which Spirit in Education Movement (SEM) and the Mekong Butterfly received from the Human Settlement Foundation Thailand together with money donated from Thai and Myanmar (living in Thailand) friends. These things and money were not initially requested by the affected Tavoyan workers themselves, but it began with the CSO’s concerns of the problems faced by migrant workers who may be the last group that will get help from the government. It is almost hopeless even for Thai citizen, there is no need to mention those who are nearly voiceless in Thai society. 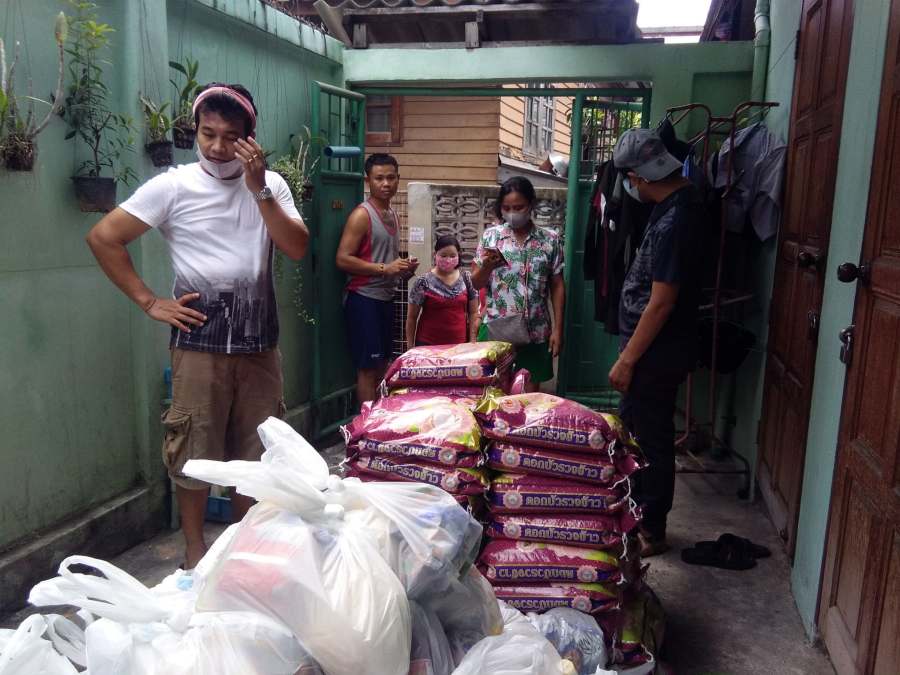 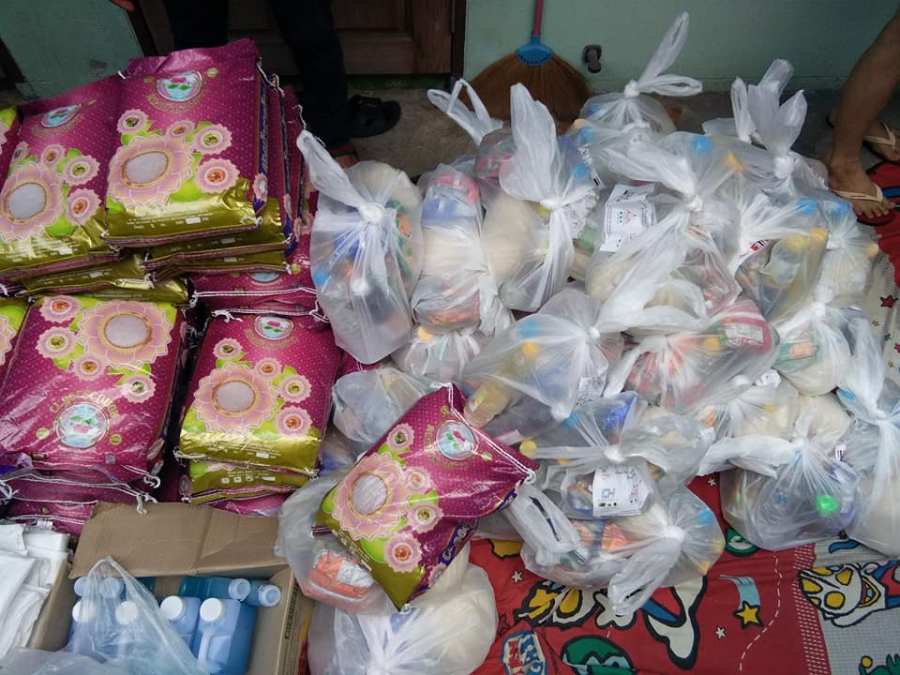 There are about 200 Tavoyans here in Wat Pai Tan community and everyone is affected by the economic activity blocking measures as well as people displacement in different ways. Some still have their work, but earn less than half or ¼ of their regular income. Some are temporarily unemployed until the situation returns to normal and get a call from their employers. Some of them though are unfortunate to be immediately laid off without any compensations from the employers, for them, the path ahead seems so dark and gloomy.

The distribution of donated items impressively took place, the Tavoyans in the community teamed up and worked to systematically; thoroughly and equally distribute such items concerning person’s and family’s needs. They communicate through mobile phones and social media in order to share news and explain about the distribution of donated things after finishing a detailed register list of affected people in the community.

We have been confirmed by the community member that there is still no infected person among the Tavoyan migrant workers since the first coronavirus infection has been reported in Thailand. Everyone takes care of themselves by wearing face masks and bringing alcohol hand gel when going out. What may be difficult is to maintain social distance, particularly among family members, as their living spaces are not very spacious that is to say there is no separate room for each member.

According to the data collected by the community’s representative, it is found that around 100 persons (more than half of the Tavoyans in the community) have currently no income and no job. It is also found that there are 12 families in which both husband and wife are temporarily unemployed and have several persons to take care of including young children.

Daeng, a 36 year-old Tavoyan employee selling candles and fragrances in Chatuchak Weekend Market and now temporarily unemployed due to the market closure during COVID-19 crisis, says that

“I actually wanted to go back home, but the checkpoint was already closed. Going back to Dawei at this moment would probably cause more difficulties as the Tovayans are now facing a drought. I do not want to bring my family more problems and can only hope that things will get better so that I could get back to work.”

“Room rental here is about 2,500-3,000 baht per month plus approximately 500 baht for water and electricity costs, I am not having enough money even for just the rent and now need to use the savings for living”, he added.

With sympathy and understanding of the current situation, some landlords then provide assistances to Myanmar tenants such as reducing more than half of the rental rate; no charging for water and electricity costs; postponing the rent until the situation returns to normal or even exempting April rental fee. These really help Tavoyan workers reducing their household expenses during this period, especially the families that have no income at all.

As they really understand the situation that migrant workers are confronting, the Tavoyans in Wat Pai Tan community therefore share some of their donated items with other nearby communities in which approximately 100 Mon and Karen people are living. The recent list shows that there are 54 persons having no job or income, these donated things are very precious to them at this moment. And in time of crisis, we have seen the systematic support and data collection of migrant workers community in order to provide the most responsive assistance.

Not only the Tavoyan labors in Wat Pai Tan community located behind Or Tor Kor market, it seems that the Tavoyans in other places are also affected especially those in tourism and service sectors in southern provinces like Phuket and Phang Nga in particular. They currently have no income at all due to the closure of beaches and sub-district travel restrictions. Moreover, Phuket itself has a significant economic proportion based on the tourism and service sectors, both employers and workers are therefore having hard times and do not know when the situation will be better.

They cannot imagine what the future would be if the government is going to maintain the lockdown measure or does not have any clear road map for easing of economic activity closures. As the schemes are always changeable, they might have to go back to their hometown and get started again later. But it will not be an easy task since the border control measures are still not relaxing. The government’s Centre for Covid–19 Situation Administration (CCSA) recently approved and announced that Thailand will be subject to the Emergency Decree for another month (from the end of April to the end of May), the situation seems to get worse.

Although, some types of business were a few days ago allowed to reopen such as markets; food stores; retail/wholesale stores; barbers and pet salons, but it does not mean that Chatuchak Weekend Market can immediately be opened. As it is a place where people gather in large group and the virus may spread out, the market will therefore not be reopened soon. Moreover, the government has warned that if the lockdown easing measures are applied but the numbers of infection increase, they may consider returning to the more intense measures. The said measures would probably kill the virus but followed by severe side effects on people especially migrant workers as subordinate class since the poverty caused by such measures could not be eliminated and that may further exacerbate the problems.

View all posts by themekongbutterfly